The story never managed to grip me and it was dragging a lot. I didn't care for any of the characters This book got much praise and is deemed as one of the best debuts this year but unfortunately, it really didn't work for me. I didn't care for any of the characters and that is the most important thing for me; if I can't connect with the main character it's hard for me to root for him and that took away the fun.

Also, the relationship between Girton and his mentor felt really weird and their conversations irked me, especially the constant repeat of the word master. I never got the vibe of reading a book about assassins and felt disappointed because of it. Overall, it lacked the element of suspense and it failed to interest me to continue with the series. I'm not saying this is crap and putting you off from reading it. By all means, read it, many people have enjoyed it but I didn't.

View all 21 comments. Jun 01, James Islington rated it it was amazing. I loved this one. And then I'll be insisting that they read it themselves. It no doubt didn't hurt as a starting point that for me, the premise - a coming-of-age epic fantasy following an apprentice assassin - is an easy sell. But then you add in that it has main characters who I actually like … and pacing that is pretty much perfect… and some excellent prose… and an intriguing central mystery… and an interesting, well-fleshed-out world….

Well, you get the idea: it hit all the right notes. I received the ARC in the mail less than a week ago and finished the book in three sittings, one of which kept me up well into the early hours of the morning.


So do I have any caveats at all? Not really. Combine that with main characters who recognise and resist the unpleasantness of the world - rather than having a cast who just shrug and go along with it, as they do in so many other books - and I feel like even people who usually shy away from gritty settings in their fantasy will find a great deal to like here. If you end up liking it even half as much as I did, it'll absolutely be worth your time. View 1 comment. Sep 24, TS Chan rated it really liked it Shelves: physical-owned. Age of Assassins is an excellent debut among many remarkable ones that surfaced this year, and we have yet another new author to look out for.

It is almost a shame that there is so much less publicity garnered by this book, which can easily stand neck-to-neck if not surpass the quality of quite a few others. This is a well-written and skilfully crafted coming-of-age tale of Girton, a club-footed apprentice to a master assassin. While there may be echoes of the Night Angel trilogy with 4.

While there may be echoes of the Night Angel trilogy with the orphaned apprentice and master trope, there is nothing derivative about this story. True that there is a sense of familiarity given the well-used concepts of coming-of-age stories with Girton being the subject of bullying, finding friendship in another outcast and unexpected love, yet the story was delivered in a manner that still felt fresh. The narrative is written in the first-person point-of-view of Girton Club-Foot.

His character development, as he slowly comes to terms with who he is, is realistic and endearing with occasional flashbacks in the form of interludes, which do not happen too often as to disrupt the flow of the story. One that is compelling, and augmented by solid supporting characters. The plot is quite simple with Girton and his master being tasked to uncover the identity of the person behind the plot to assassinate the heir to the throne.

This placed him in an undercover role as a lowly squire-in-training in the castle where he was then subjected to the usual problems when young men form cliques and bully the misfits. And I am always gladdened when the culprits received their well-deserved comeuppance. I loved the component of mystery in this novel, which to my delight is superbly executed and kept me guessing right until the end.

The heir is quite a despicable person, and with all the political and courtly intrigue that is gradually revealed, it just appeared that a whole of people wanted him dead and for valid reasons. How does one uncover the real mastermind under such circumstances? As with stories involving assassins, readers will want to be shown and not told that so-and-so is a badass killer, etc.

There is definitely sufficient showing in here, demonstrated in a fascinating fashion. Unlike one popular epic fantasy series which utilised stylistic terms to describe sword forms, these iterations were actually explained so that I understood the movements it entailed. The world that RJ Barker created fits the title of the series most aptly. The Tired Lands is bleak and magic-scorched and where sorcerers are deemed as abominations. People are designated by three different classes, and there is a pervasive feeling of a broken kingdom. While the in-world mythology took quite some time to be unravelled and terminology understood, it did not present much of a struggle and was delivered quite seamlessly into the story without disrupting the flow.

Barker's prose is fluid, accessible and drives the narrative forward without being too simple nor given to unnecessary complexity. 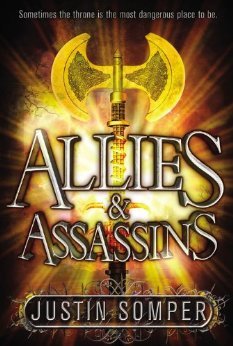 As such, the pages turned quickly, and with its engaging narrative, I finished the book most expediently. I wholeheartedly look forward to the sequel and highly recommend this book to all fantasy readers. View all 8 comments.

Jan 15, Esme rated it really liked it. I've wanted to read this for a long time, but I haven't had a chance to until now, and I'm so glad I picked this one up on audio. Apologies for the spelling of names, as I did audiobooks these are all my best guesses on how things are spelled. Our main character, Gertin, was raised as a slave until age six when he was sold at auction to a new "owner".


Melerah takes pity on him and decides she can give him a better life even if that life is one of an assassin. Throughout the book we get two timelines, one in the present and interludes full of flashbacks leading up to the present. Most of the flash backs have to do with the relationship between Gertin and Melerah and the more background I got, the more endearing the relationship became to me. She trains him well, and at 15 years old they get ensnared into a mission by the Queen to find out who wants to kill her son, the only heir to her kingdom.

Her thought process is that she can "control" her son, but from an outsider's perspective it's all self-delusion. It's a mystery who wants the heir dead and there are a lot of potential subjects considering how precarious his family's rule is, and how much of an asshole he can be to everyone around him. Gertin is assigned to the squire's division to see if he can gather any information there, and observe the heir since he's in training as well.

People form cliques and in order to get information you have to get in with those cliques. With a clubbed foot and being forced into a facade that he's just a lowly country boy with no skill with a sword, Gertin is finding it very difficult to make friends. He does manage to make one friend, another outsider named Rufrah, but he's not as unconnected as he seems. Rufrah has made a friend of all the outcastes, the servants, the slaves, the ones that go beneath the noble's notice.

These people talk to each other and gossip travels fast, with Rufrah's help Gertin gains ground on who the possible assassin could be. Mages in this world are hunted down and executed. Long ago there was a Black Sorcerer who Soured the land to the point where it turned yellow and barren. To try and restore the land people gather up magic users and spill their blood on the ground to try and revive it.

They don't always just slit their throats, though. Sometimes magic users are put into Blood Gibbets and slowly tortured to death over the course of weeks, leaking small bits of blood into the soil every day.

I really loved the mounts in this, they were called 'horses' but they were antlered and have tusks, and they can also live for hundreds of years. The magic in this is subtle, it's there throughout the book but it's not an 'in your face' approach. I liked Gertin even though he can definitely be an angsty teenager from time to time.

He tends to be more independent given his upbringing, but his youth tends to shine through in stressful moments - or girls. He's also been incredibly sheltered, he's lived his whole life with his master and hasn't been away from her for more than a few hours at a time.

Being is pretty much all about being stuck in between being an adult and being a child, so his ability to think clearly and make good decisions sometimes, but also mess up and do something impulsive another time rang true to his age. I do think my favorite character though is his master.

She's incredibly mysterious and we only get bits and pieces of her past hinted at through other characters. She's an assassin but also has mercy, she doesn't kill because she finds joy in it - it's just a job.